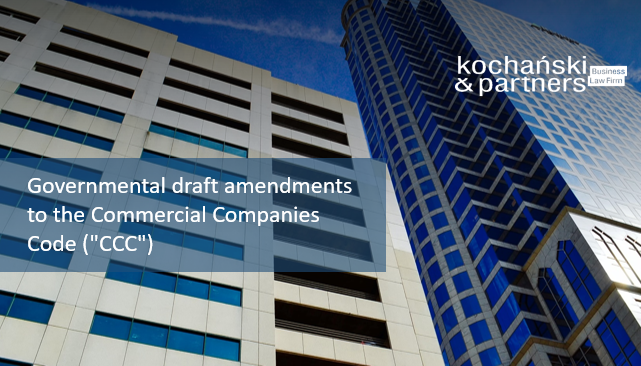 On 5 August 2020 the Government Legislation Centre published online detailed assumptions of the government’s draft amendments to the CCC (“Project”). The Project, in response to the repeated calls of practitioners, aims to introduce a number of changes to Polish law, including in particular the so-called holding law, regulating the private and legal relations of a parent company and its subsidiaries, creating a category of “group interest” and responding to the lack of factual holding institution in the existing legal regulations. The Project introduces also other significant changes, e.g. in the specification of the rights and obligations of company supervisory boards, aimed at increasing their competences, as well as unification of certain doctrinal and practical differences.

The Project in its original form has been directed to public consultation, lasting 45 days, i.e. until 19 September 2020.

The Project contains a legal definition of “a group of companies”, according to which it should be understood as “a parent company and its subsidiary or subsidiaries, directed – in accordance with the articles of association or the statutes of each subsidiary – by a common economic strategy (group of companies’ interest) which enables the parent company to exercise uniform management over the subsidiary or subsidiaries”. This definition is, in principle, intended to apply to factual holdings, but with the simultaneous deletion of Article 7 of the CCC it will also be possible to apply to contractual holdings, if meeting the criteria of factual holdings.

In consequence, as indicated in the explanatory memorandum, the institution of a group of companies is envisaged as a “qualified” relationship of dominance and dependence between the specific companies constituting the group, as these companies are guided by a common economic strategy which is intended to enable the parent company to exercise uniform management over its subsidiary or subsidiaries.

The rules governing the institution of a group of companies can be divided into two main categories, i.e.:

A parent company in a group of companies will be given the right to issue binding instructions to its subsidiaries if justified by the specific interest of the group of companies in question, with a refusal to do so being possible only in specific cases.

As a result of the above changes, the liability rules for members of the management board of the group’s companies will also be modified. Generally, such management board members shall not be exposed to potential adverse consequences of executing a binding order from the parent company.

Strengthening the position of the Supervisory Board

The clarification and broadening of the competences of the supervisory board is intended as an attempt to stop considering it as a purely controlling body and instead to establish it as an equal partner for the management board in order to ensure greater security for companies and their environment.

Among the most significant changes in the functioning of the supervisory board are:

Although, some of the obligations or rights provided for may be limited in the articles of association or statutes. However, this does not change the fact that these changes will significantly increase the role of company supervisory bodies.

It is also worth noting a number of further changes introduced by the Project, including in particular:

The direction of the proposed changes and the essence of individual solutions should, in our opinion, be considered as positive. The Project addresses a number of issues that raised concerns in practice for some time, and should be positively seen from a business perspective.

The dominant objective of the regulations contained in the Project is to increase the effectiveness and availability of mechanisms to ensure effective ownership supervision over capital companies, as well as to improve the coordination of the operation of those companies operating within the group of companies, and as a result the possibility to increase revenues or optimize costs.

The Project provides for a three-month vacatio legis, bearing in mind the need to amend the content of company articles of association (statutes).

How may we help you?