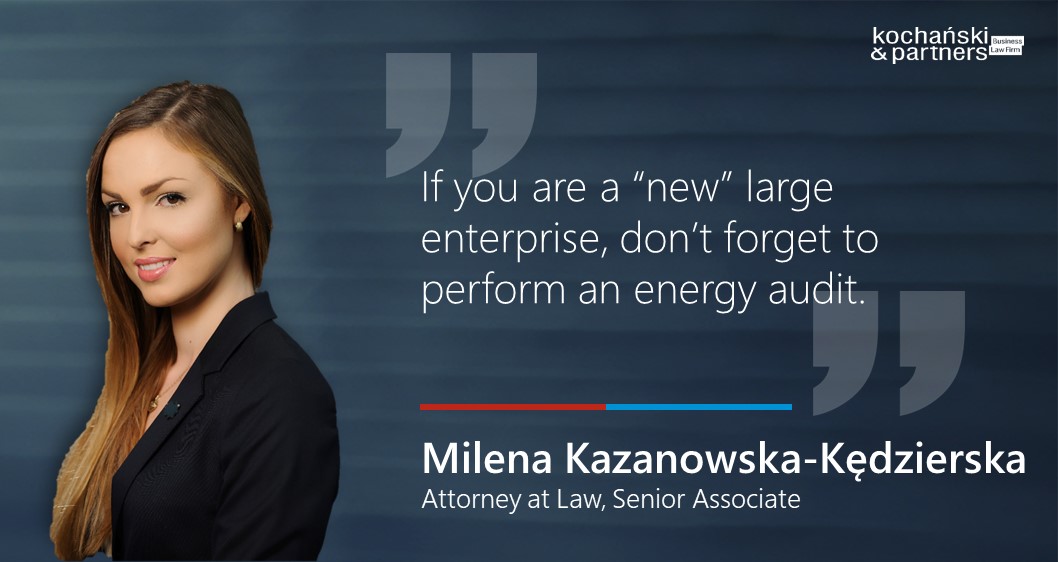 If you are a “new” large enterprise, don’t forget to perform an energy audit

The  Energy Efficiency Act carries the obligation for a specific category of businesses (not only energy companies) to prepare an energy audit. A business energy audit is a procedure that involves analysing proposed projects in order to identify energy savings and improve energy efficiency. In practice, the energy audit is an investigation of energy consumption or power demand, carried out in a company by a licensed auditor.

Who must perform an energy audit carried out?

All so-called “large enterprises”, regardless of the type and form of business activity (i.e. other than micro, small and medium enterprises), are obliged to have an energy audit performed.  This group includes companies which during the last two financial  years:

Importantly, this obligation is not limited to energy companies. It also applies to companies which, though consuming small amounts of energy, have a high annual turnover or employ significant numbers of people, such as outsourcing, consulting, IT companies, raw material importers, banks, carriers and production plants.

When to carry out the energy audit?

An undertaking which, in the years 2014 and 2015, qualified as a large enterprise was obliged to have an audit carried out for the first time within 12 months of the Act becoming effective, i.e. by 30 September 2017.

Undertakings which became “large enterprises” at a later date, i.e. met the above criteria for the first time in subsequent years (e.g. in 2018 and 2019), are also obliged to perform an energy audit.

The Act does not set any explicit deadline for the performance of the first energy audit by an enterprise obtaining the status of a large enterprise in subsequent years. It may be assumed, however, that an enterprise that has become aware of obtaining such status (i.e. meeting the financial or employment criteria) is obliged to carry out the energy audit as soon as practicable, with due diligence exercised. These regulations are broad and may be interpreted in various ways, depending on the objects of a particular undertaking. It is therefore relevant to indicate that every “new” large enterprise should take immediate steps to conduct the energy audit.

A large enterprise is required to perform the audit every 4 years, and notify the President of the Energy Regulatory Office of its performance within 30 days.

What sanctions may be imposed on enterprises failing to conduct the audit?

Failure to perform the energy audit is subject to a penalty imposed by the President of the Energy Regulatory Office. The penalty may amount to a maximum of 5% of revenue (not income) achieved by a sanctioned enterprise in the previous tax year.

How can we help?

An entity that has not yet performed the audit, despite being obliged to do so, and in relation to which no penalty proceedings have so far been instituted, should consider implementing an action scenario involving the performance of the outstanding audit. It must then inform the President of the Energy Regulatory Office of its performance and may possibly request, providing relevant explanations and arguments, that the penalty be waived. This may help avoid or reduce the penalty.

Given the justified risk of high fines, non-complying enterprises should take immediate steps to develop and implement a relevant strategy to minimise that risk.

Please feel free to contact us with any questions about the energy audit.