KZRP at the Legal Apprenticeship and Job Fair. 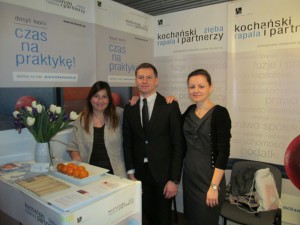 Kochański Rapala & Partners shall take part in the 5th edition of the Legal Apprenticeship and Job Fair, which is held on 17-18 March 2015 at the premises of the University Library in Warsaw.

The fair is organized by the following: BCSystems, the Faculty of Law and Administration of the University of Warsaw as well as the Students Self-Governing Body of the Faculty of Law and Administration at the University of Warsaw. The fair is held under the Honorary Patronage of the Minister of Justice of the Republic of Poland, Mr. Cezary Grabarczyk.