Kochański & Partners short-listed in the category ‘Law Firm of the Year: Central Europe’

We are pleased to advise that Kochański & Partners (K&P) has been short-listed, for a second time in a row, by the most prestigious international legal magazine with the largest global readership – ‘The Lawyer’ in the category ‘Law Firm of the Year: Central Europe’ for its annual European Awards 2017.

The Lawyer is a leading weekly British magazine for commercial lawyers and in-house counsel, first published in 1987. Since 2008 the magazine ranks firms on an impartial and non-commercial basis and then publishes a list of Europe’s top 100 law firms.

Entries were at a record level high in what is the seventh year of the Awards with large and medium firms applying. Given the great number of competitors, being short-listed itself is a great achievement – in effect meaning that we are amongst the six best law firms in Central Europe.

The winner will be announced at an awards ceremony on 16 March 2017 in London. 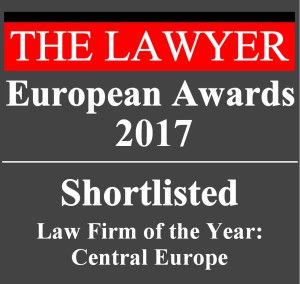