Karolina Marciniszyn and Krzysztof Zięba are among this year’s IP Stars. 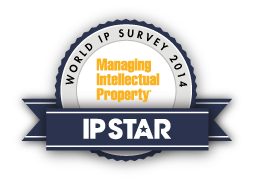 Karolina Marciniszyn and Krzysztof Zięba have been for the second time in a row selected as IP STARS in the international Managing Intellectual Property Ranking widely recognized by IP practitioners. The results of the ranking were officially announced at the INTA (International Trademark Association) conference held in San Diego, this year attended by both winners.

21 Polish lawyers from, among others, Patent and Trademark Attorneys’ Offices, such as Patpol or Polservice, as well as from Polish and international law firms, such as Baker & McKenzie, CMS, SKS, Traple, Hogan Lovells, were selected as winners; see a full list of the winners attached.

The ranking consists of a number of stages and involves the submission of properly prepared reports of cases regarding the protection of patents, licenses, trademarks, etc., their review by MIP researchers, holding discussions with those responsible for the ranking and obtaining recommendations from competitors and customers.