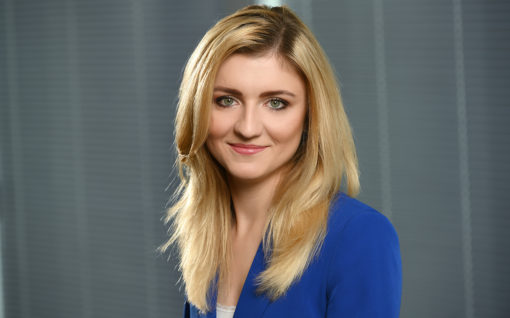 Patrycja has participated in litigation projects, including matters regarding the protection of personal rights, as well as proceedings relating to the so-called “franc loans” and “low down payment insurance”. In addition, she supports the aviation law practice in the field of passenger rights.

Patrycja held the Rector’s Scholarship for the best student throughout her studies representing the Lazarski University at the 10th International Air Law Moot Court Competition in Chandigarh, India.

As a student, she worked in the Student Legal Clinic where she provided ongoing civil and criminal law advice and was a speaker at numerous Polish National Scientific Conferences devoted to family, administrative, criminal and aviation law.

Patrycja authored a chapter in a collective work titled “ABC administracji”, Vol. XIII, edited by Dr hab. Sławomir Fundowicz and mgr. Paweł Śwital; scientific monograph, ISBN 978-83-944559-3-4., “SKAUTH”; title: Adoption as a family form of foster care”, September 2016. She also authored a gloss to the Ruling of the Supreme Administrative Court of 7 June 2016, File No. I OSK 2184/14, on the liability of an air carrier for overbooking.

Patrycja has advised on compensation claims for medical errors, accidents at work, personal and transport damages as well as broadly understood aviation law.