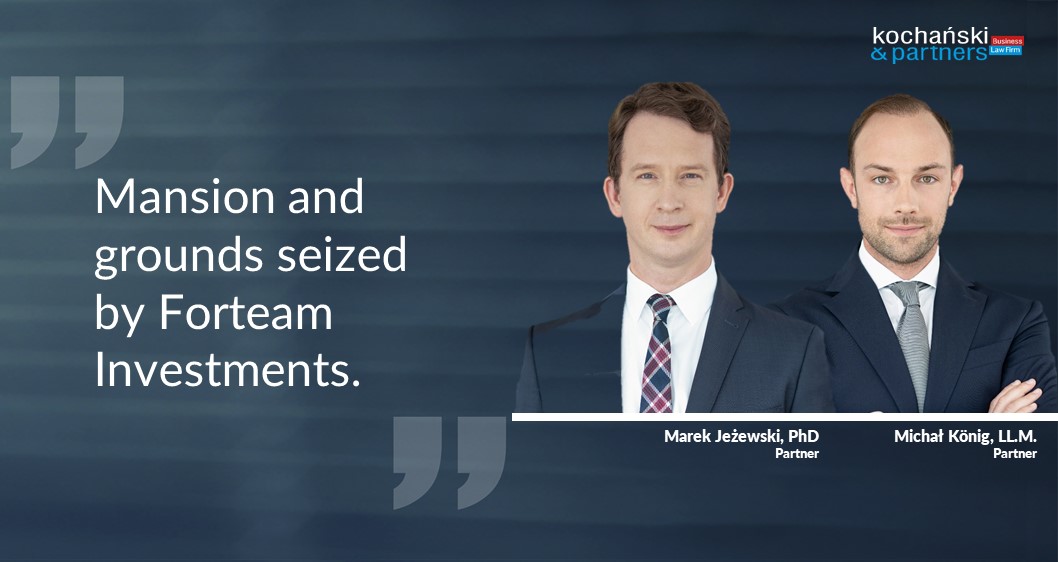 The Regional Court in Poznań granted the fourth successive injunction in favour of Forteam Investments Ltd., an investment company belonging to Delta Capital Partners Management – a U.S. private equity fund, in the pending dispute with Mariusz Świtalski. This time, all assets of Druga – Sowiniec Capital, including a mansion in Sowiniec, surrounding grounds and a polo club with horses, have been seized as a result of seizure of shares under the court decision.

The seized property covers a 279-hectare park, a mansion with an area of ​​over 3,000 m2, 14 bedrooms, 24 bathrooms, an indoor swimming pool, and a tennis court. It also features a private marina on the Warta River, a helipad, a runway, a stable, two full-size polo fields, and a riding hall. The value of the entire property in 2015 was EUR 50 million.

In addition, the injunction applies to all Świtalski FIZ investment certificates and the related property rights, including shares in other partnerships controlled by the Świtalski family. Moreover, under the injunction, the court regulated and defined Forteam’s rights and obligations in detail which allowed it to retain the property rights granted.

Another attempt to dispose of assets prevented

In an attempt to block Forteam from pursuing its claims, the entities controlled by the Świtalski family had been attempting to dispose of their assets even prior to the court decision granting the fourth injunction. On 20 August this year, the Świtalski family had planned to redeem most of its shares in Druga – Sowiniec Capital sp. z o.o. sp.k., and issue new shares to Mr. Piotr Rogowski. However, this was prevented thanks to Forteam’s prompt action. In the injunction issued in October, the court suspended the registration proceedings at the National Court Register blocking further attempts to transfer assets from Druga – Sowiniec Capital.

“With this court decision, we were able to seize Mariusz Świtalski’s most important assets and prevent further assets from being concealed and disposed of. This is another step bringing us closer to a fair resolution of the dispute and the enforcement of receivables resulting from guarantees made by Mr. Świtalski. This is also a warning for any persons seeking to do business with Mr. Świtalski and his partners to carefully check if the subject matter is not covered by one of our four injunctions,” said Christopher DeLise, CEO of Delta Capital.

The injunction obtained in October is yet another court ruling in favour of Forteam. The first, from February 2020, secured claims against Mariusz Świtalski and the Sowiniec Group partnerships controlled by him. Regardless of this, Mariusz Świtalski went on to dispose of and conceal his assets, forcing Forteam to apply for further injunctions. As a result, another court ruling was obtained in late April this year, covering certain assets owned by Mariusz Świtalski’s children. The third injunction applied to a 45.94% stake in Czerwona Torebka, which had been unlawfully disposed of by Świtalski FIZ.

All four injunctions were obtained awaiting a ruling in further civil proceedings against Mariusz Świtalski in connection with his breach of a guarantee agreement executed with Forteam Investments in 2015. Forteam’s claim exceeds PLN 300 million.

As a reminder: On 8 May 2015, Forteam purchased a 100% stake in Małpka S.A., the owner of the Małpka Express chain, from Czerwona Torebka. In settling the transaction, Forteam sold its stake (16.18%) in Czerwona Torebka. At the time of signing the sales agreement, the parties were aware of Małpka’s difficult situation. The agreement, itself, noted that the parties realized that further considerable financing would be needed for the company to reach the break-even point.

In line with this, Mariusz Świtalski and the Sowiniec Group also executed a Guarantee Agreement with Forteam, which provided Forteam with a guaranteed return on the Małpka investment if the Małpka Express store chain was later sold to a third party. Mariusz Świtalski made a written declaration that his personal assets were sufficient for him to fully discharge his obligations under the Guarantee Agreement.

When Forteam attempted to sell Małpka Express in 2018, it was unable to obtain consideration for even the minimum sale price set in the Guarantee Agreement, despite engaging a renowned independent investment bank to run a robust sales process. Mariusz Świtalski did not exercise his pre-emptive right to buy Małpka Express at that time for the guaranteed amount.

Accordingly, Forteam notified Mariusz Świtalski on 28 December 2018 of his obligation to remit the monies owed to Forteam pursuant to the Guarantee Agreement. Nevertheless, Mariusz Świtalski and the partnerships controlled by him have failed to pay any amounts due to Forteam which, as a consequence, made it necessary to file for injunction and take civil action. As a result of Mariusz Świtalski’s actions, Forteam was forced to take additional steps to secure certain assets owned by his children and other entities to which Świtalski had transferred his assets.