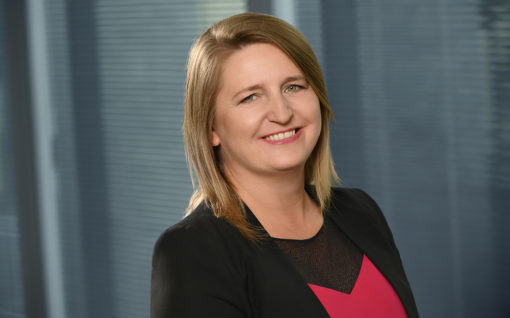 Agnieszka Serzysko specializes in banking law, restructuring law, commercial law, with particular consideration of financing transactions, including capital market transactions and banking transactions. At the same time Agnieszka passionate the European criminal law, on which field with many achievements.

Agnieszka has been involved in a number of national and international projects with respect to project finance, acquisition finance (share deals and asset deals), investment finance, refinance of debt and finance the real estates by banks and other financial institutions. Successfully advised in various bank transactions, also with a range of short-term financial flows and cash reserves and debt redemptions, as well as in the preparation of internal banking documentation, regulations, politics. Agnieszka served as the supervision function of the facility agent and the security agent in the conducting transactions, as well as to assess compliance with security requirements following capital agreements on the structure of the assessment of capital adequacy of financial institutions (Basel I, Basel II and Basel III).

Prior to joining the K&P Agnieszka worked in ING Bank Śląski S.A. as the specialist, next the senior specialist and the legal counselor in the Documentation Team of Strategic Clients by Structured & Corporate Lending Department.

In 2013 she received a special award for legal services and the preparation of credit documentation to finance the acquisition of an investment fund, the first pioneering transaction of its kind on the Polish market.

Since 2012 year, Agnieszka occasionally has been a researcher-didactic at the European Centre at University in Warsaw. The author of dozens of publications published in Poland and abroad, concerning issues of European criminal law. Agnieszka has been a speaker and lecturer at numerous conferences and workshops  in Poland and abroad, devoted to both academic and practical issues. She cooperate with the Institute for Justice, the Helsinki Foundation of Human Rights, the European Centre at University in Warsaw and the National Academy of Sciences.

Membership: The Warsaw Bar of Legal Advisors; European Research Academy (ERA) in Trier, the European Criminal Law Academic Network (ECLAN) and the Centre of the European in Natolin.

on the high profile GBP 180 million financing granted to Pepkor Europe of the Steinhoff Group.